We would like to take this time to celebrate all those who served our country, including those who continue to serve our communities through LSF’s programs and services. It is truly an honor to have these heroes as part of our team.

Derek Gosney, LSF’s Director of Strategic Projects, previously served 22 years in the U.S. Air Force. Derek’s military career was as diverse as it was long. He enlisted after graduating High School at the rank of Airman and retired at the rank of Captain. Derek was trained and worked short stints as a Mental Health Technician and a Recruiting Services Officer, but over 16 years of his career was in meteorology. Starting as a weather observer and finishing as the leader of a 15 person weather forecasting unit, Derek was stationed in 6 U.S. states, 2 foreign countries, and deployed to Afghanistan. 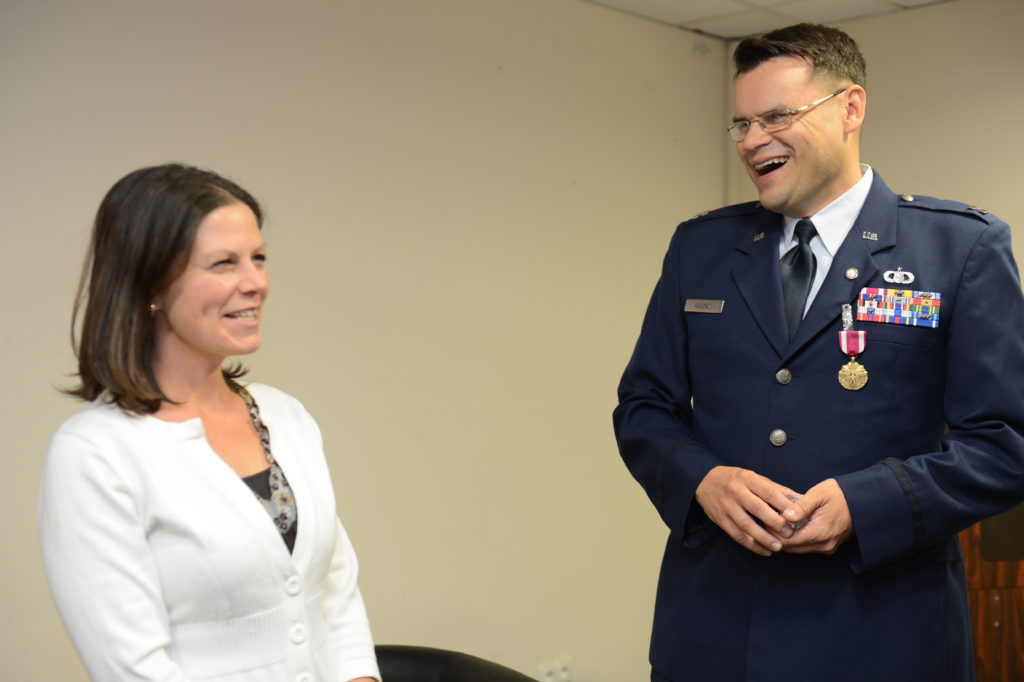 Derek Gosney and his wife, Jennifer, reminisce about 22 years of service at his retirement ceremony.

As an operational weather forecaster Derek provided mission-tailored support for the President of the United States on 9/11, fighter pilots supporting troops in combat, NATO forces in developing their own meteorological capabilities, the 101st Airborne conducting combat exercises, security forces at the World Cup games in South Korea, NASA missions, and a wide variety of other Department of Defense initiatives.

John Short is a decorated USMC Veteran and was one of the first recipients of the LSF HERO award in September of 2017.  In addition to supporting the Head Start programs across the state, he oversees the emergency communications software for LSF.  One of his more recent successes was leading the project to bring the Head Start digital application online, which has generated more than 100 applications to date.

Diona Royalston has been a Certified Child Welfare Professional Case Manager with Lee County Case Management Organization (CMO) since January 2017. She is an advocate for the teens on her case load, who does not hesitate to drop what she is doing for these youth when called upon. Diona strives to help the youth be accountable for their actions, identify solutions and set short- and long-term goals.

In addition to her full-time work with LSF

Diona is entering her 5th year as an MA3 United States Sailor.

“My job is to support and defend the Constitution of the United States of America,” Diona said when describing her role in USA Armed Forces.

She has a Masters at Arms tasked to provide 360 degree security, anti-terrorism and force protection. Diona is part of a team that operates in harbors, rivers, and ashore to conduct patrols, and protect high valued assets inland and ashore.  In Diona’s spare time, she is the mother to two beautiful young ladies, J’Aira  and Jade.  Thank you Diona for your service to the United States of America and LSF!

Sheketa Smith- Has been the nurse at Oasis for 3 years and counting, since August 2015.  She served in the US Navy from 2002 – 2006 was She has received many honors during her service: Defense Service Medal, Sea Service Development Medal, Global War on Terrorism Expeditionary Medal to name a few.